A few weeks back, the WRX ticked over the 40,000 mile mark. As I’ve mentioned in previous posts, most of the car has held up spectacularly well over the last four years! Unfortunately, the brakes have really taken a beating.

After getting my wheels powder coated, the OEM brakes were quickly becoming an eyesore. A couple midwestern winters had taken their toll and a good portion of the brakes was showing some surface rust. 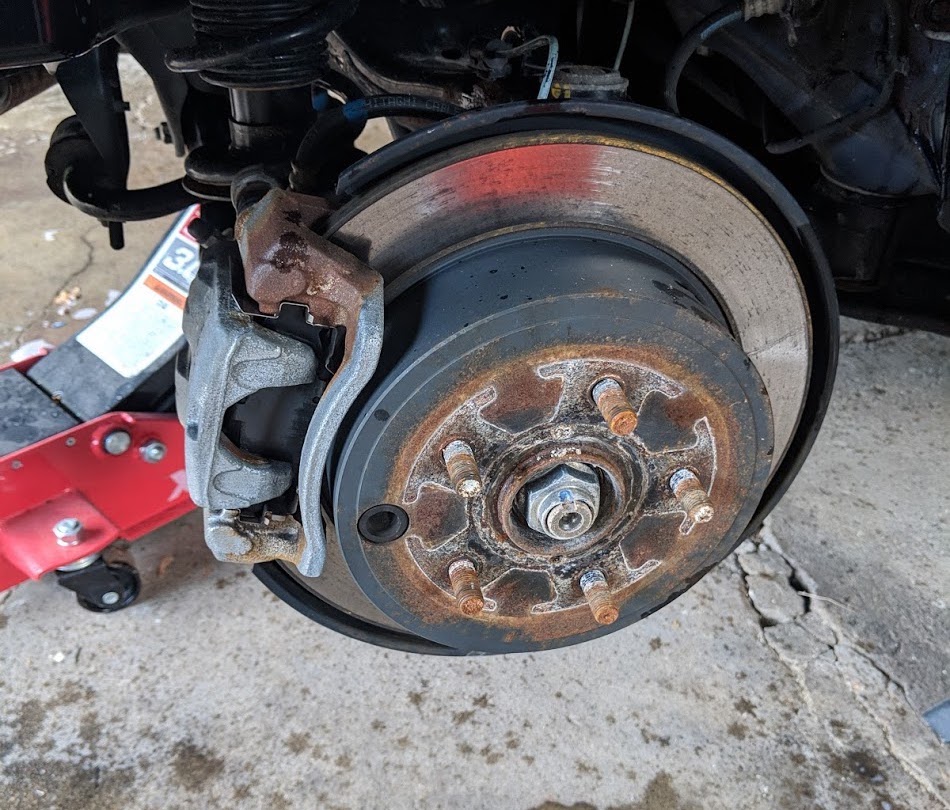 I had cleaned up and painted the calipers a few years back, but the rotors themselves had started rusting at the hubs. With the like-new wheels installed, it was hard to look past them anymore. I decided to start evaluating at my options for upgrades.

While it would look amazing, I knew I couldn’t go with a full STI Brembo swap - a very popular and easy option for the WRX, partially because of cost but also because it seemed like total overkill on a car that never sees the track. 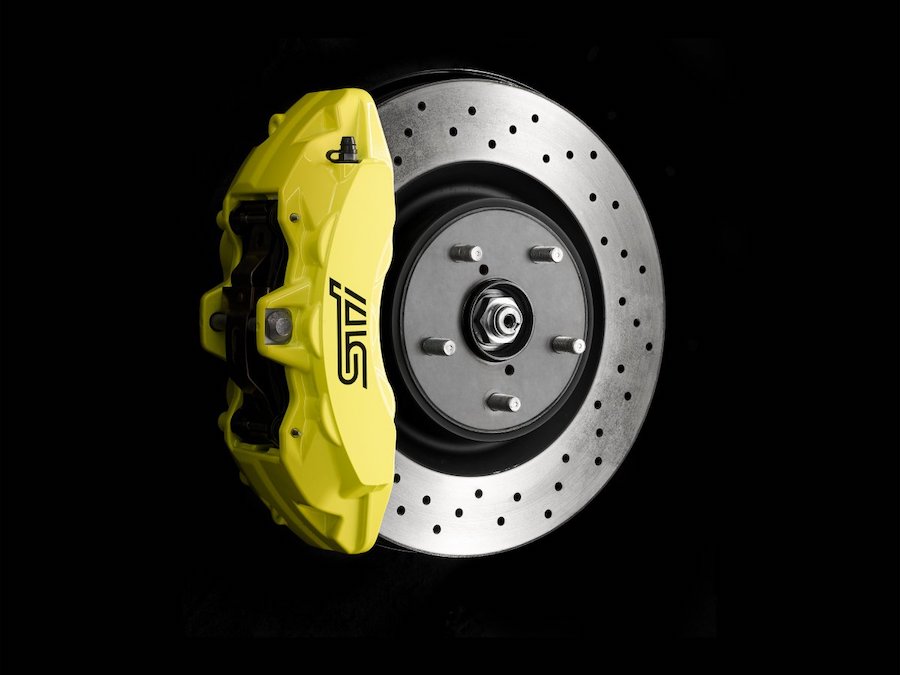 Instead, I decided I wanted to get something that would give a bit more performance but maximize the “bang for buck”. Finally, and most importantly, the new brakes had to be daily driver-friendly - squealing and dusty race brakes need not apply.

As luck would have it, my friend Chris had recently upgraded the brakes on his STI and had a great experience with KNS Brakes out of North Carolina. They had helped him decide on a brake kit for his car, and walked him through the pros and cons of each option. Be sure to go check out Chris’s install video over on his YouTube channel. He goes into a ton of detail about his setup, and walks through how to do a brake swap on his STI!

So, I reached out to KNS myself and Ken got back to me right away. He helped me understand the pros and cons of various rotor and pad kits they offered. 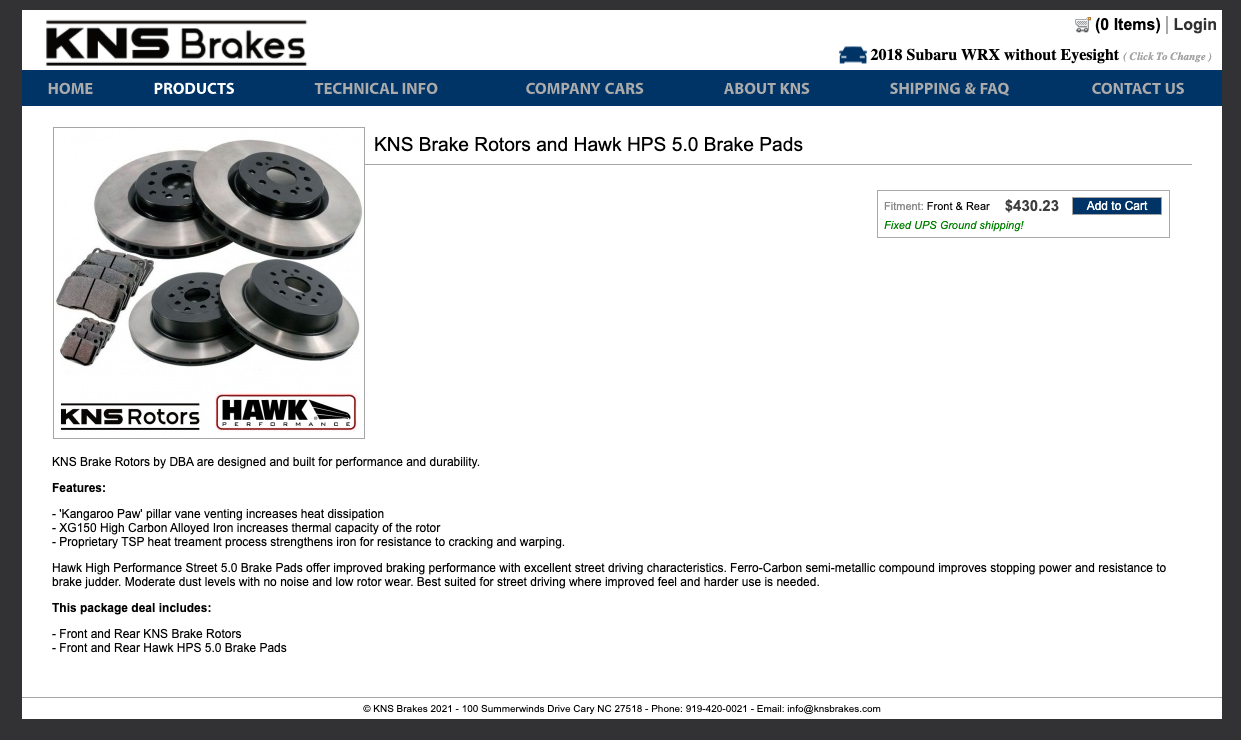 In the end, I ordered up a set of their KNS rotors and Hawk HPS 5.0 pads. I opted against slotted or drilled rotors since, aside from looks, I really wouldn’t see any benefits off the track.

Shipping was super quick - everything showed up just two days later! After watching the FedEx driver drop the package on his way to my door (they are a lot heavier than they look), I unpacked the rotors and pads for a closer look, and was super impressed by the quality. 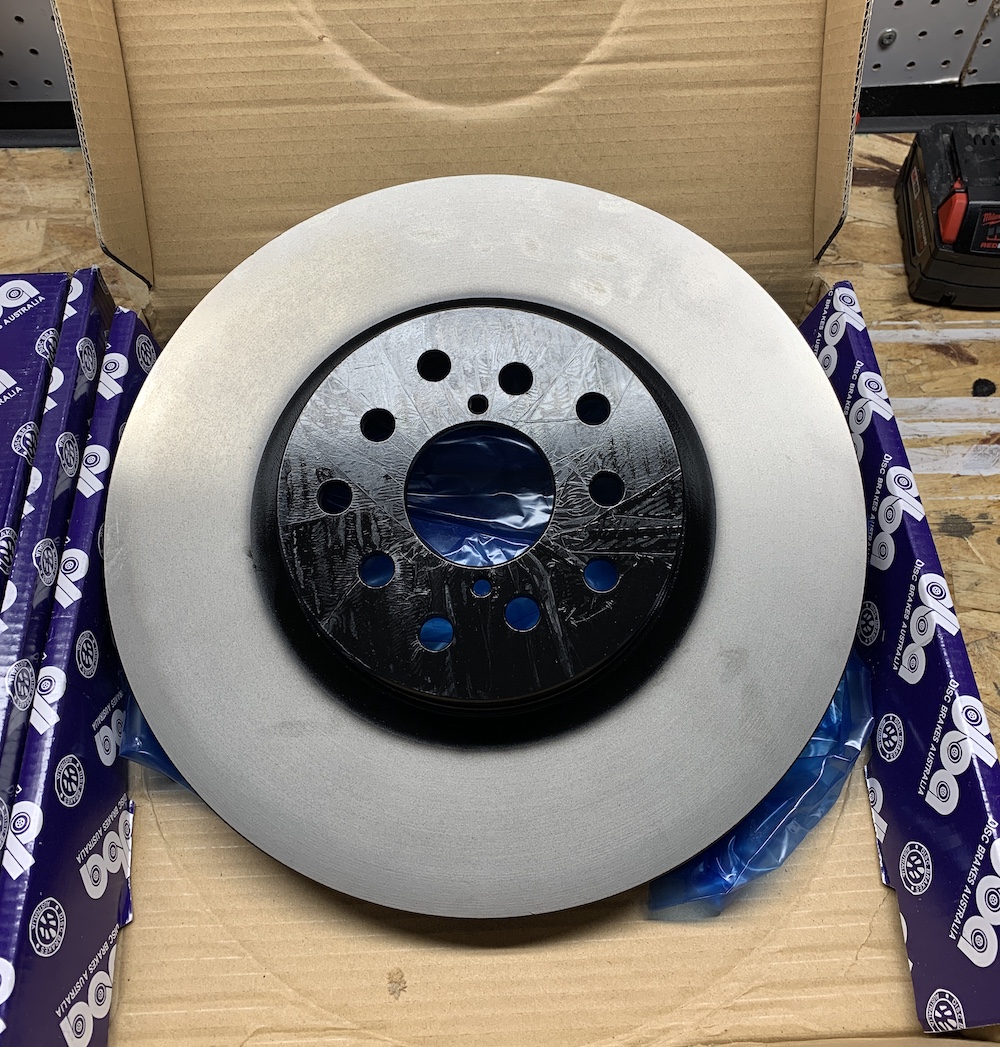 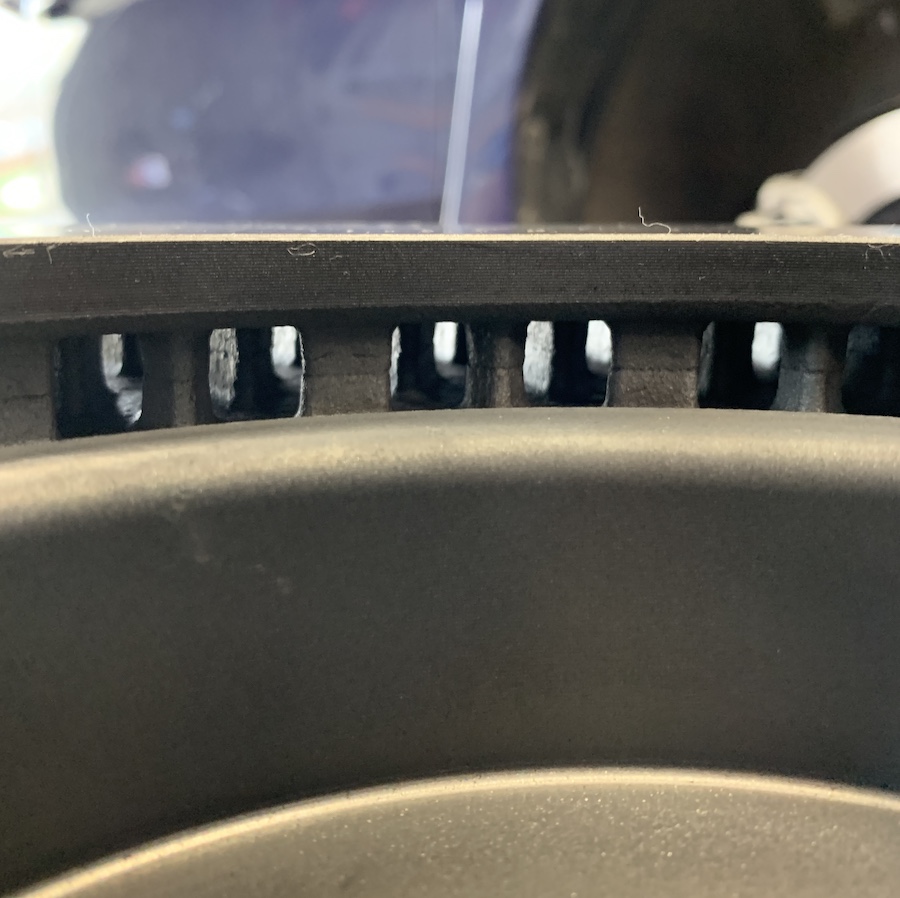 The rotors are manufactured for KNS by Disc Brakes Australia (DBA), a well-known name in the brake industry. They are beefy as hell and utilize a “kangaroo paw” venting system to more effectively dissipate heat than the OEM rotors.

The Hawk HPS 5.0 pads are a street-friendly semi-metallic compound that gives a bit more performance than OEM without sacrificing on noise or generating up a ridiculous amount of brake dust. The pads on my Fiesta ST were dust machines, so I knew just how annoying overly-aggressive brakes could be…

Doing the brakes on my wife’s Outback last year was my first foray into this type of work. While I ended up not swapping the rotors on her car, I still learned plenty from changing out the pads.

First things first, I parked the WRX, chocked the wheels, and jacked up and the front end. With the wheels removed, getting the caliper off was as simple as removing two bolts on the back side holding everything to the mounting bracket.

I left the caliper to hang from the suspension using a bungee cord, making sure to keep the brake line from being too stretched or pinched in any way. 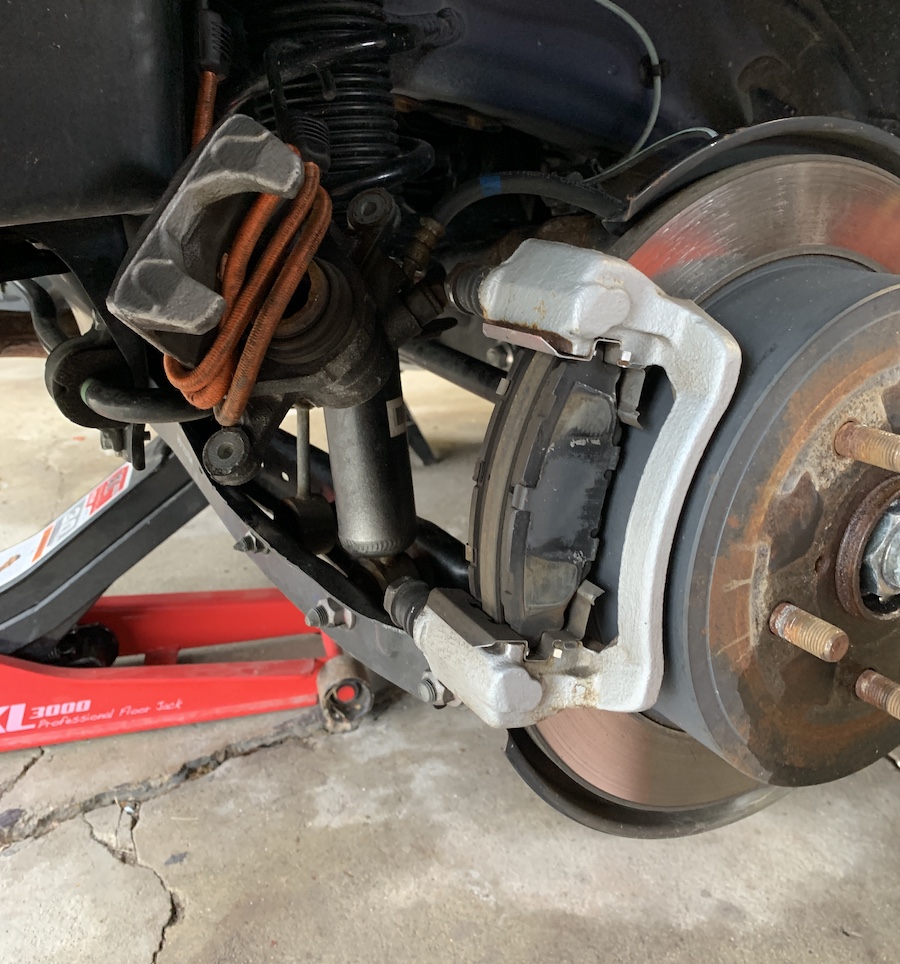 At this point I was able to slide out the OEM pads and pop the mounting bracket off by undoing the two remaining bolts on the back side of the hub. 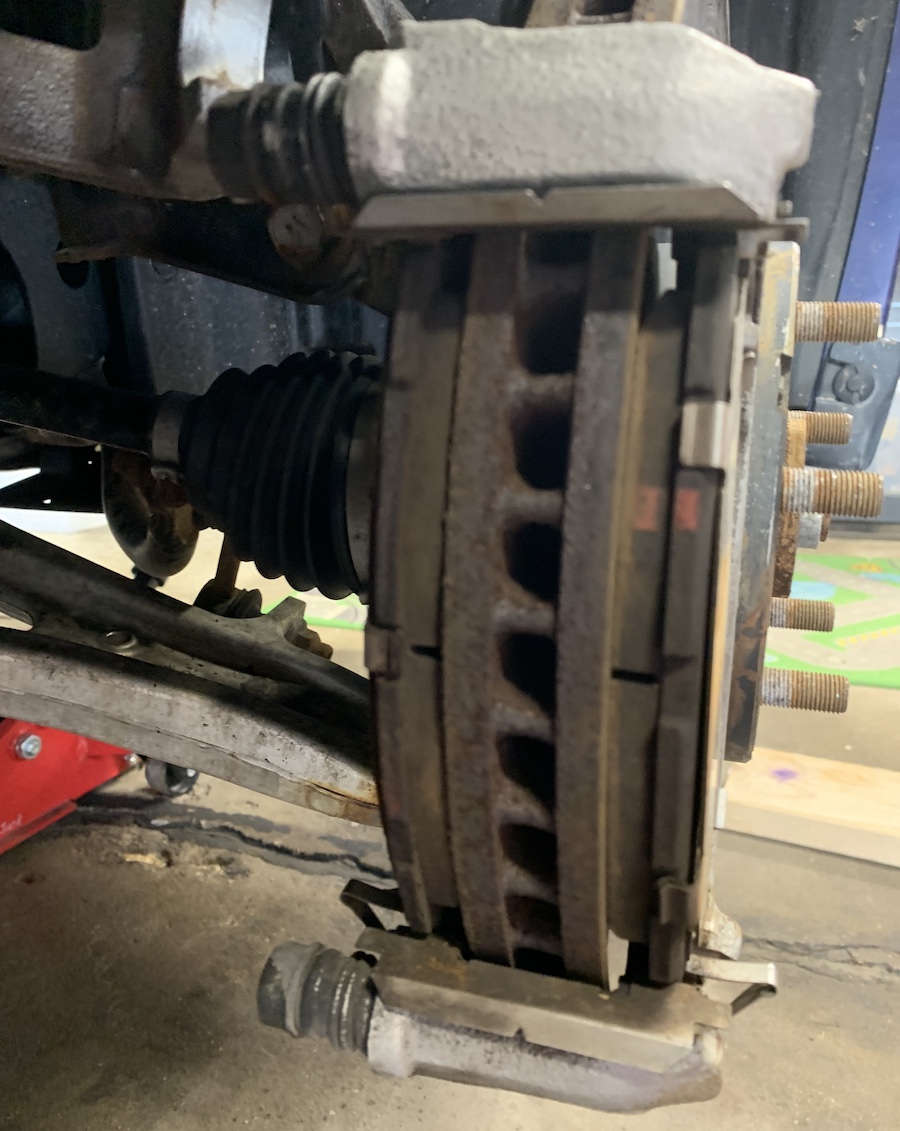 Getting the rotor off the hub was a bit trickier… I fully expected this part to be a PITA, but having watched a few videos I felt confident. Lots of folks recommended using the threaded 8mm holes near the center of the rotor/hub to “break” the rotor free from the hub. 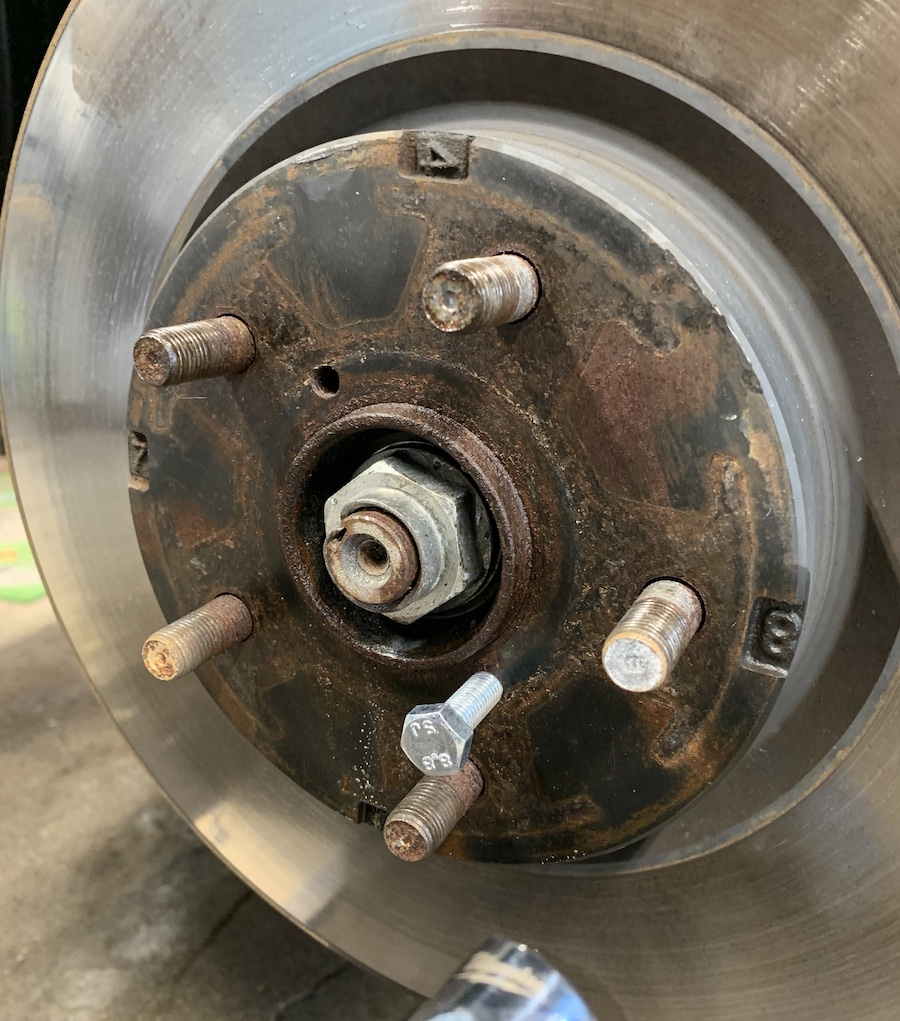 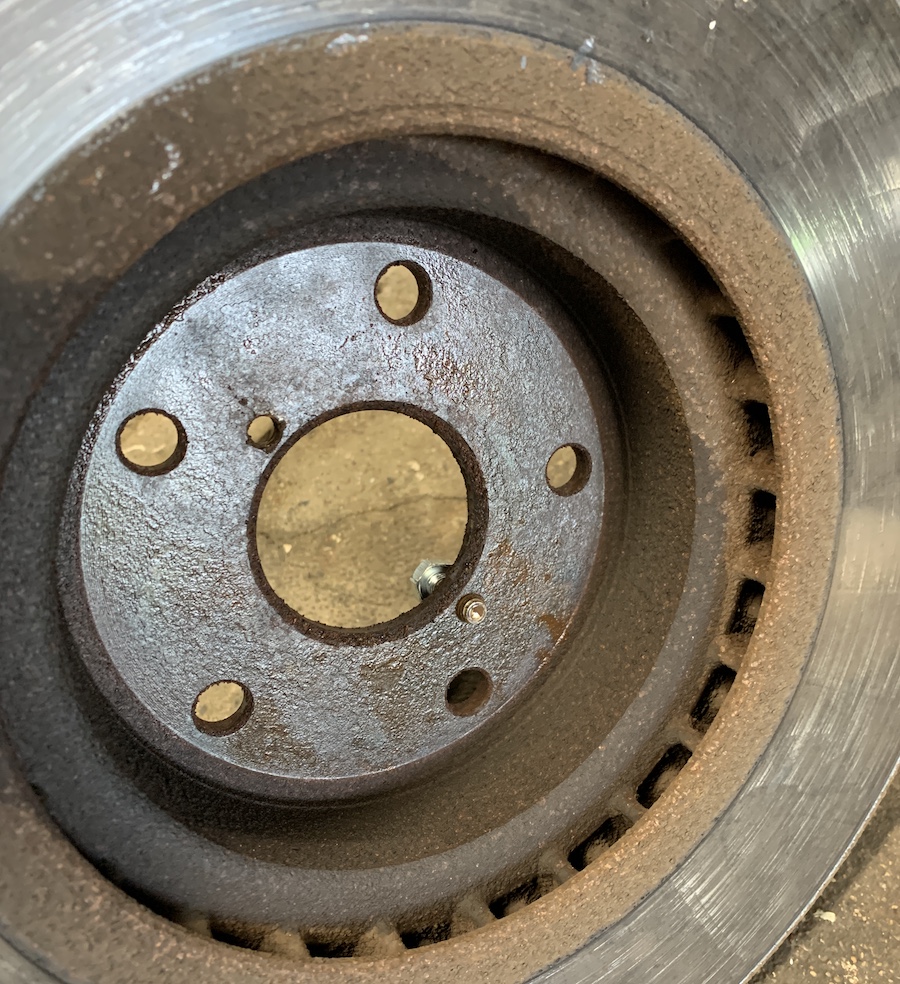 I followed the advice of one video too closely and tried using the M8 bolt that keeps the brake line connected to the strut tower. Unfortunately, the bolt itself has an unthreaded portion on the end, and the hole on the rotors had some buildup of rust in the hole. This meant it was almost impossible to get the bolt to grab onto the threads of the rotor and I ended up cross threading it.

To add insult to injury, this meant I would be unable to reinstall the bolt on the strut tower later. Thankfully, my local Subaru dealership was still open, so I headed over to pick up a replacement bolt. On the way home, I also grabbed a separate, longer M8x1.25 bolt from Home Depot to pop the rotors off more easily. 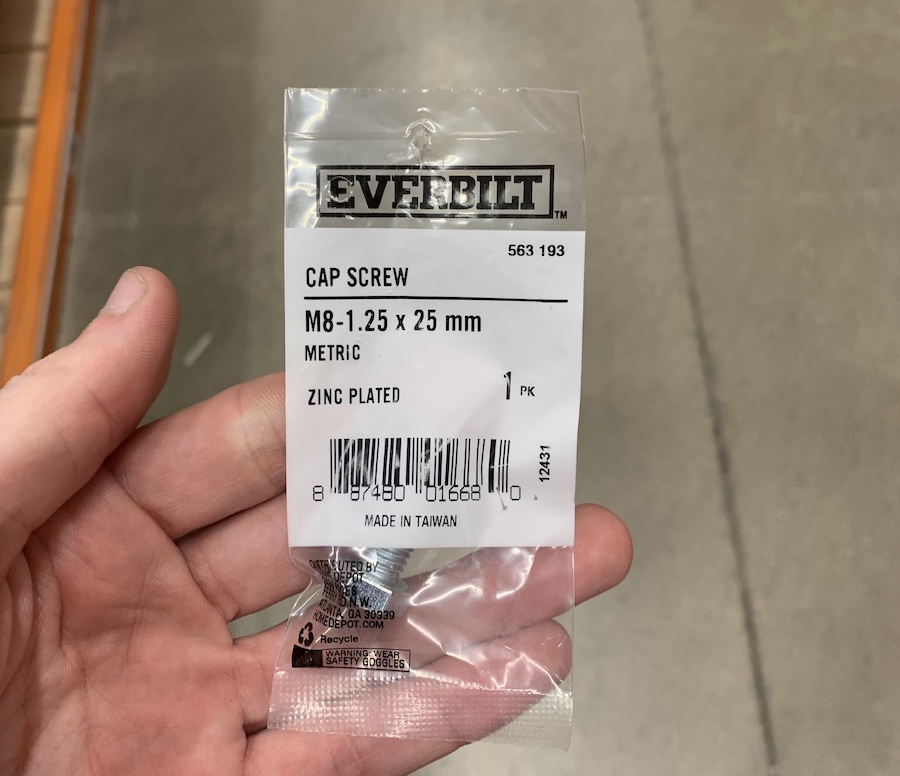 Once I got back in the garage, the M8 bolt threaded in perfectly and I had the rotors popped off in no time!

I decided to tackle cleaning up the caliper mounting bracket next. With a wire brush and some brake cleaner, I got most of the grime and dust off, cleaned up the guide clips and re-lubed everything. The slide pins on the bracket were in great shape for 40,000 worth of wear and tear, but I cleaned and lubricated them too for good measure. 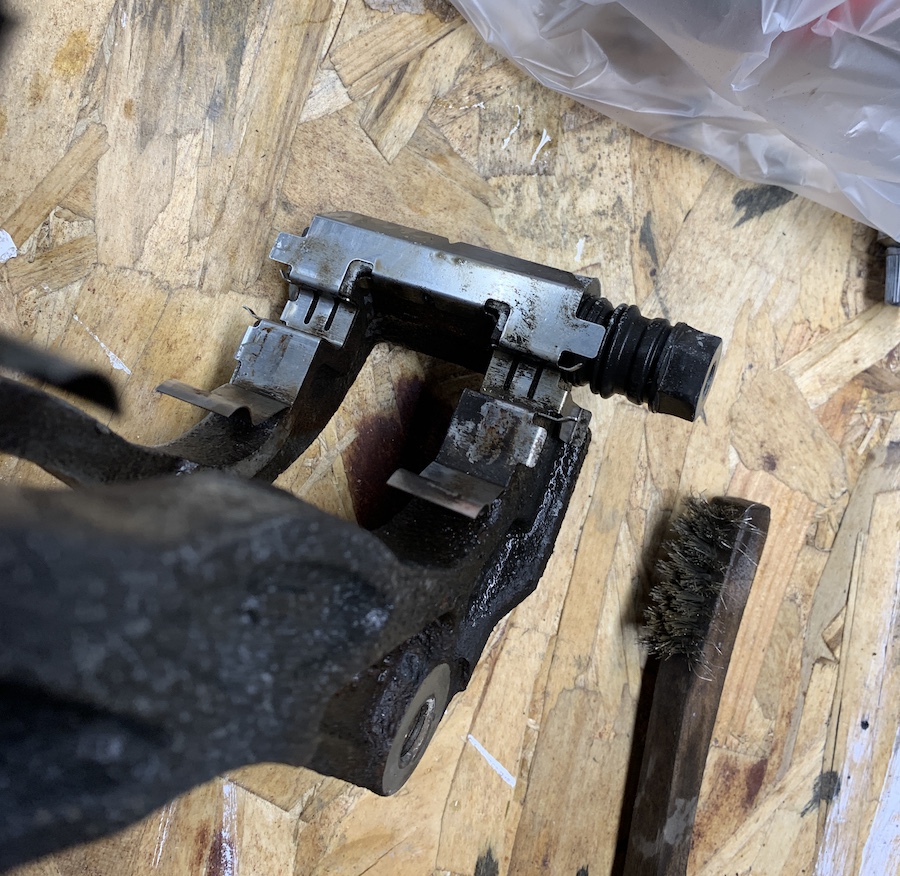 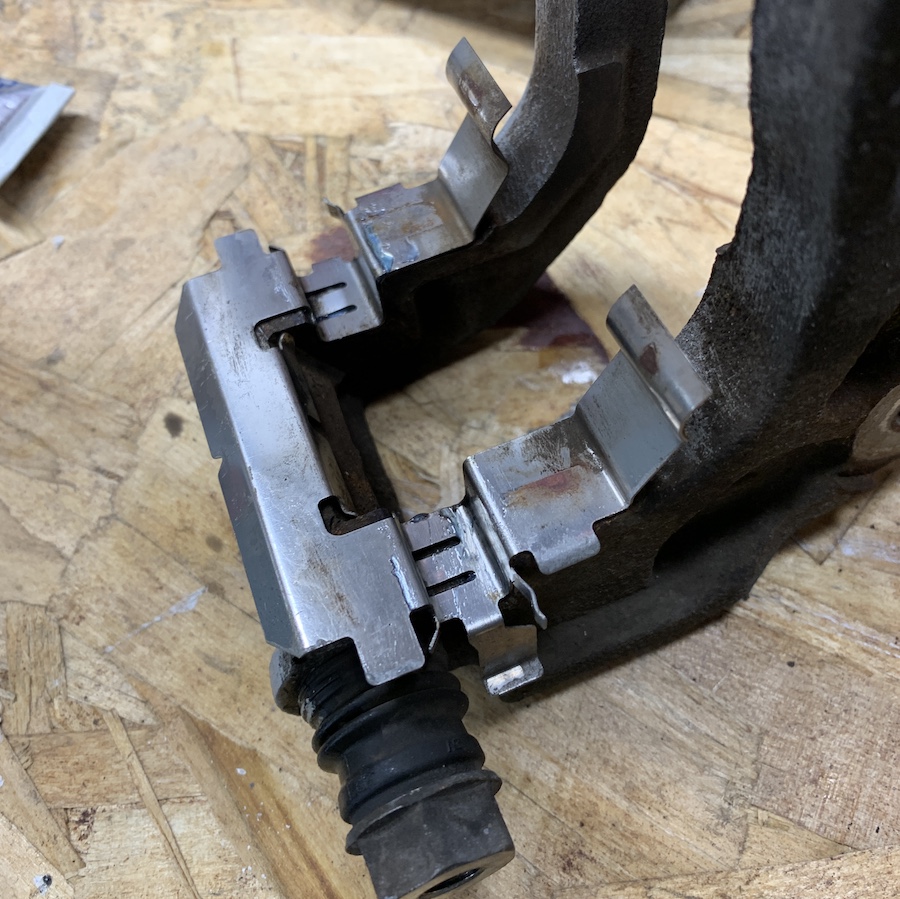 Next, I carefully wiped down the face of the rotors with brake cleaner, making sure not to get any cleaner on the painted area. This was easier to do by spraying cleaner on a rag and then wiping vs dousing the rotor itself.

With the new rotors on, I unpackaged the new Hawk pads and got the shims installed with the included grease. Being careful not to touch the face of the pads, I slotted them into the brackets following the orientation of the OEM pads (the wear indicator should be pointed downwards). 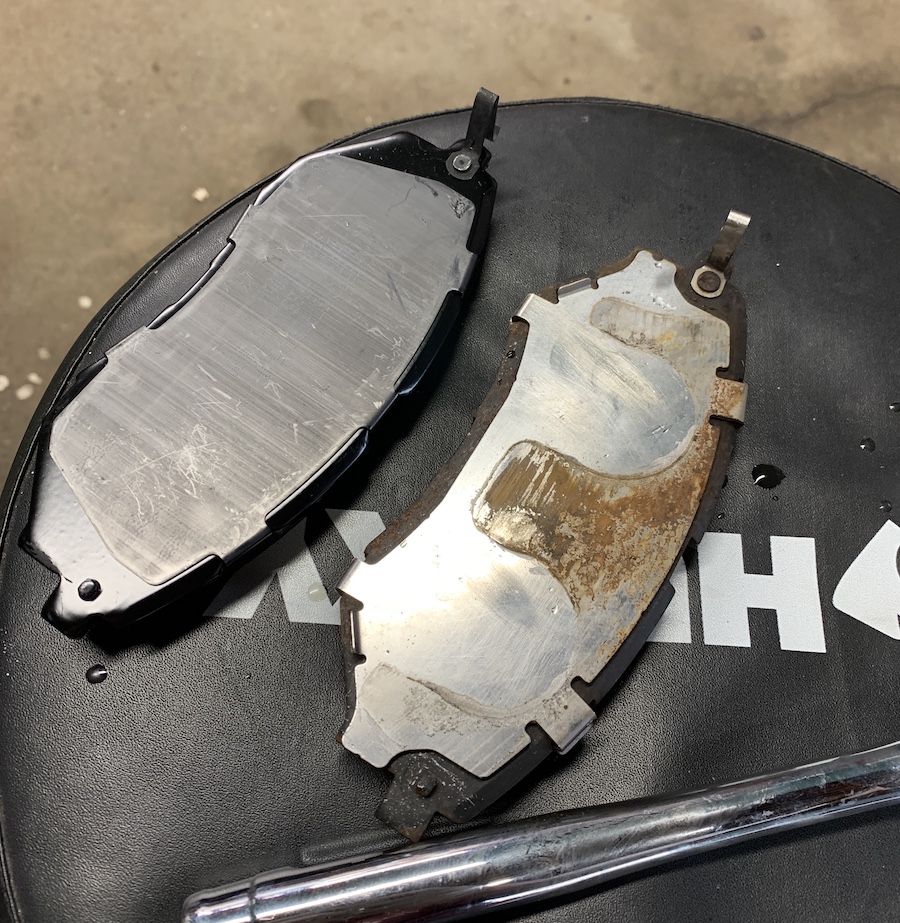 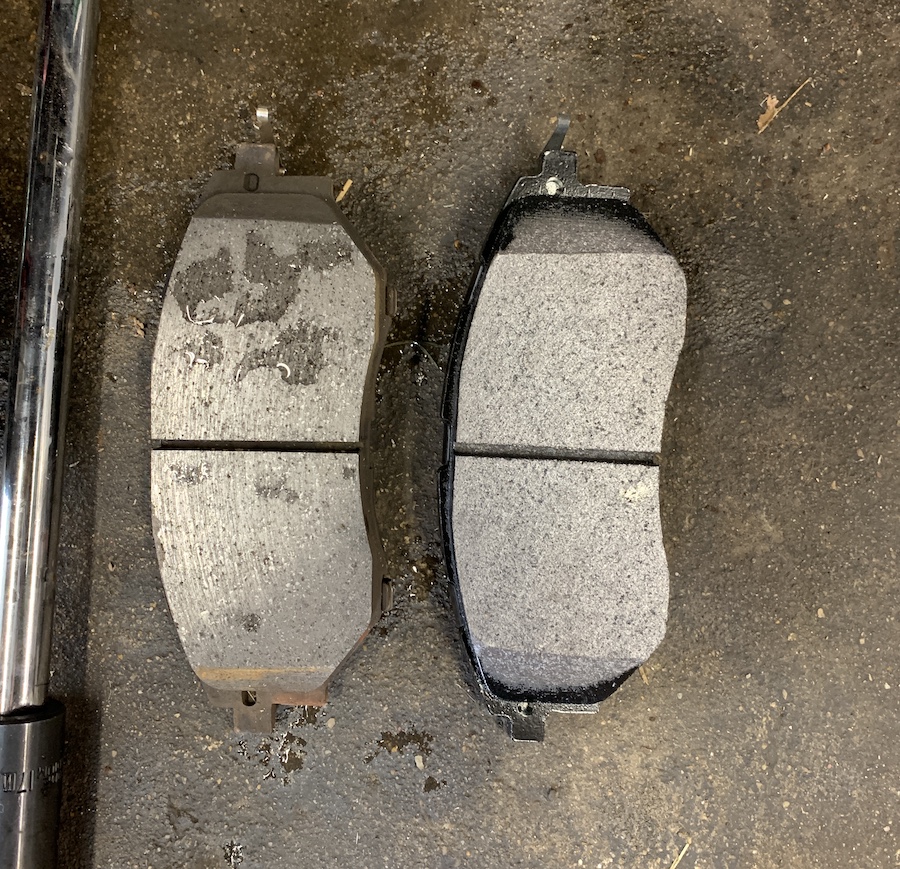 Before reinstalling the caliper, I popped the hood and removed the brake reservoir cap. This was so that when the caliper pistons are retracted, the pressure in the lines has somewhere to go. I didn’t do this on my wife’s car and had no issues, but the general consensus on the interwebs seemed to be it’s better to be safe than sorry. 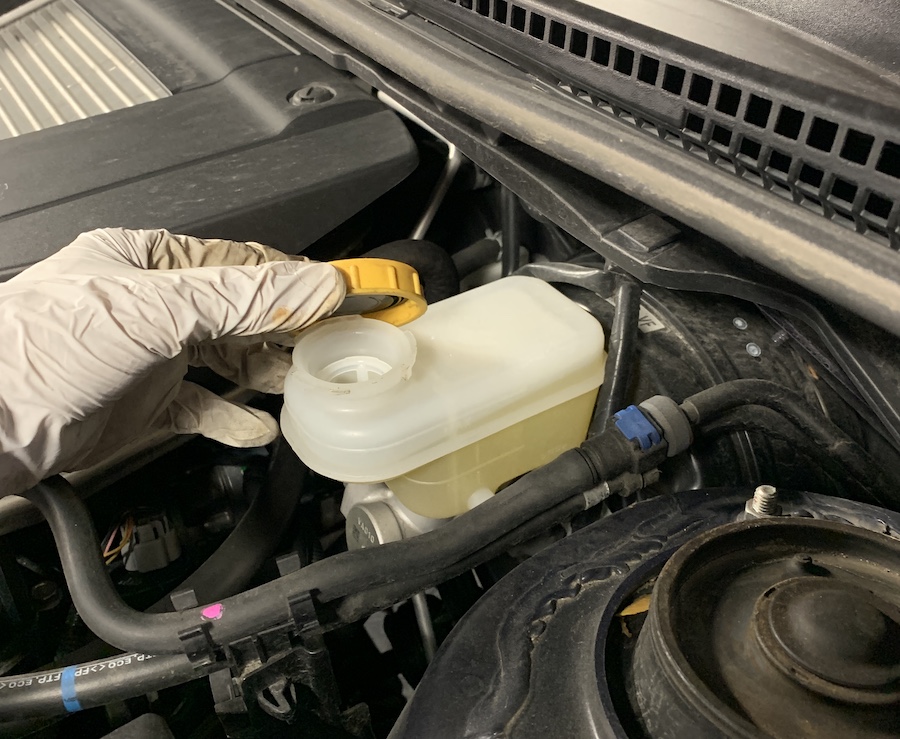 Using a cheapo spreader tool from Autozone, I got the brake pistons retracted enough to slot the caliper back over the new pads. With the two slide pin bolts reinstalled, I did a once over to double check my work and appreciate the new rotors and pads! 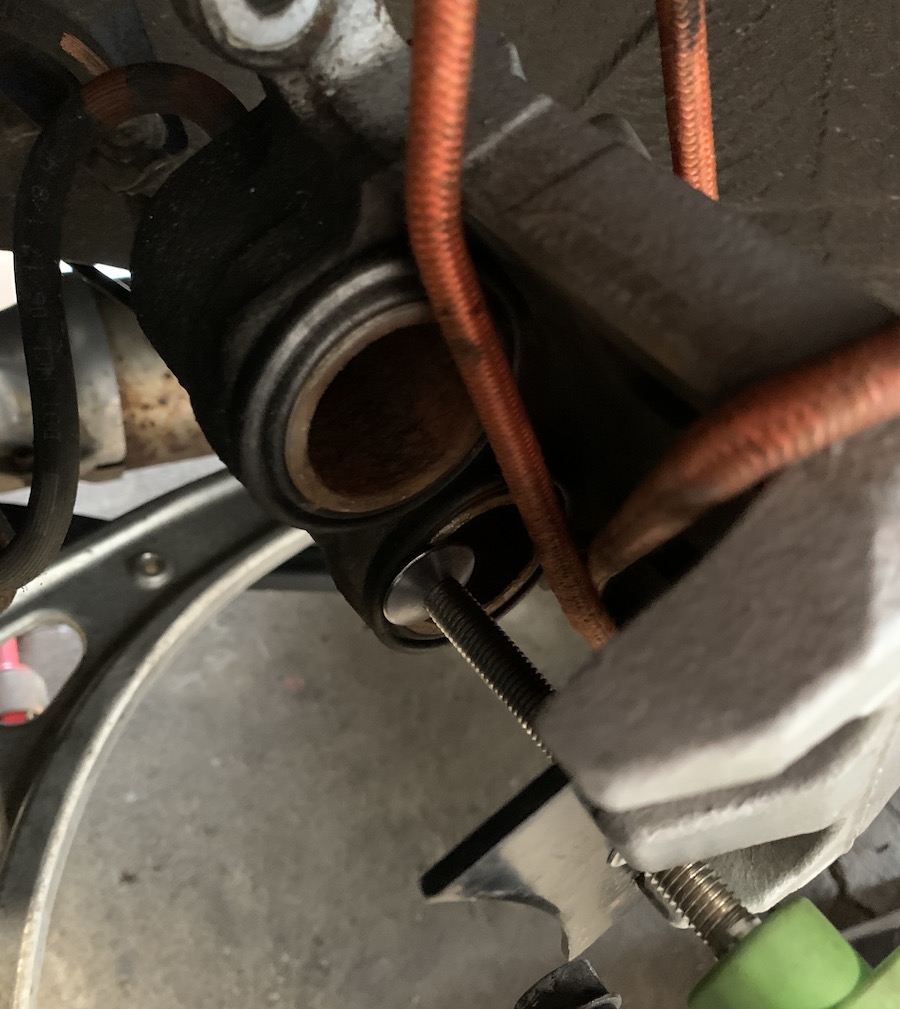 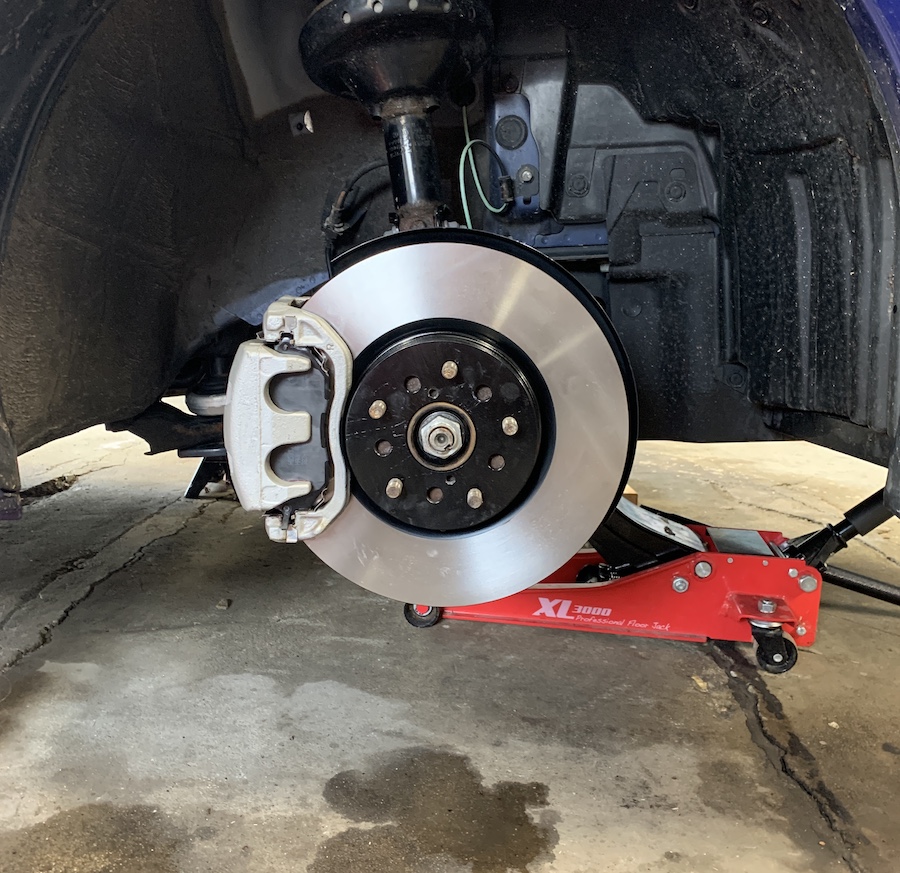 The rears went much more smoothly! 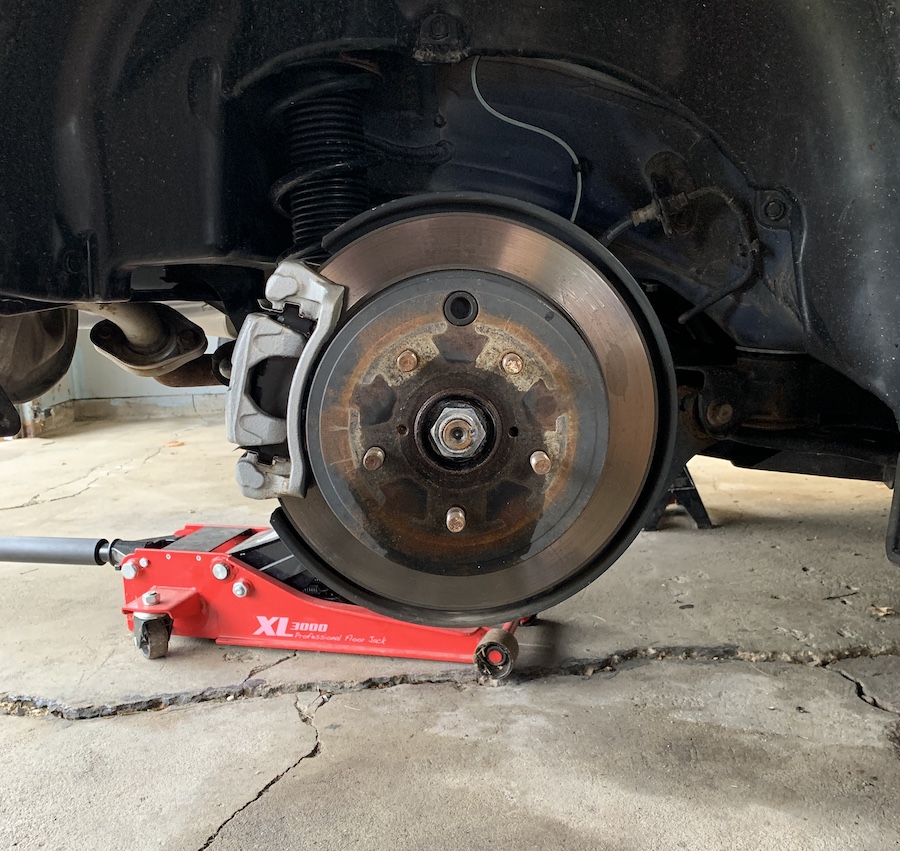 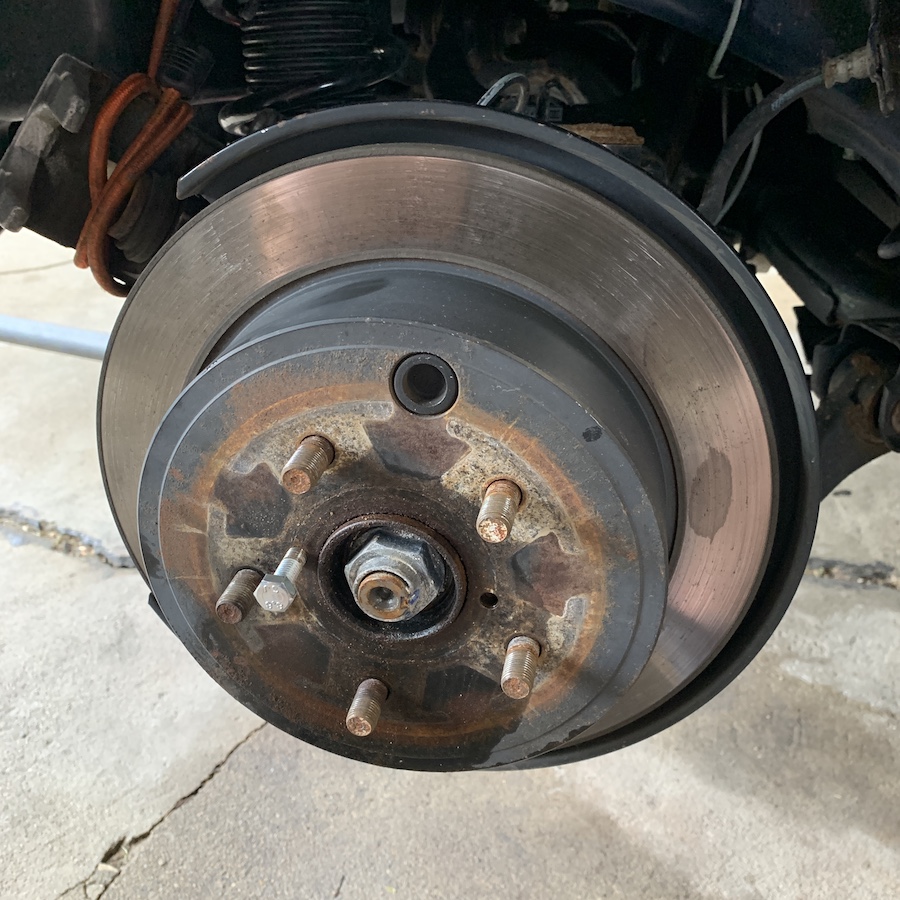 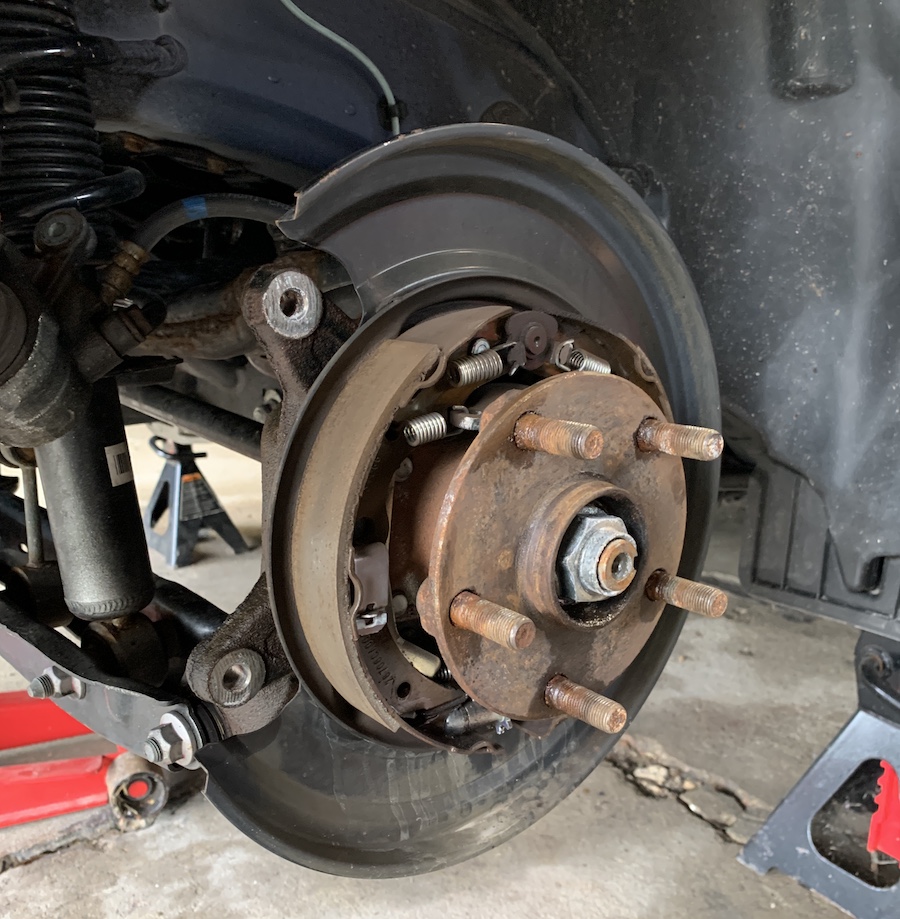 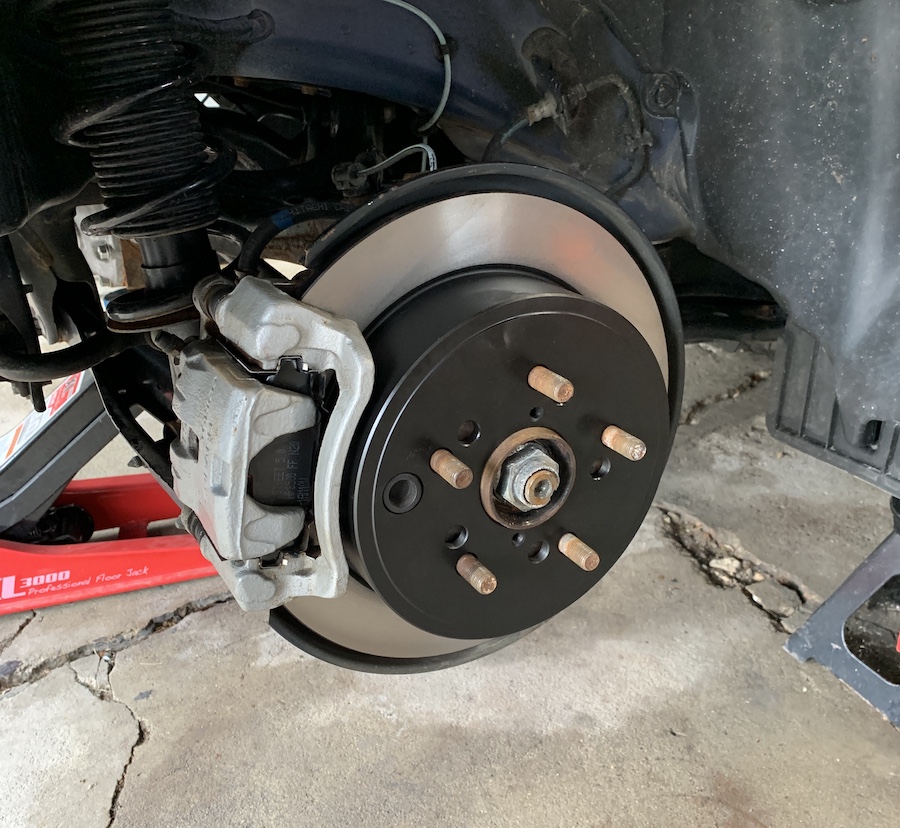 Couple tips if you’re doing this job on your own WRX:

The last step is to prime the new brakes. Since the rotor pistons were retracted, you don’t want to just stomp on the brake pedal. Instead, slowly and gradually apply pressure to the brake pedal, letting off the pedal each time. Eventually the pressure will build up and you should feel the brakes fully engage.

After I got the car put back together, I took it for a spin around the block to make sure everything was working. Starting at low speeds, I applied the brakes carefully to make sure they actually stopped the car.

Eventually I made my way over to an empty business park by my house. Building up the speed, I followed the following procedure to “bed” the new pads and rotors:

While completing this process, I was blown away at how much more bite the brakes had. I never lacked confidence in the OEM setup, but the KNS rotors and Hawk pads perform spectacularly. There’s a little more initial grab to the pedal now, which took some getting used to. 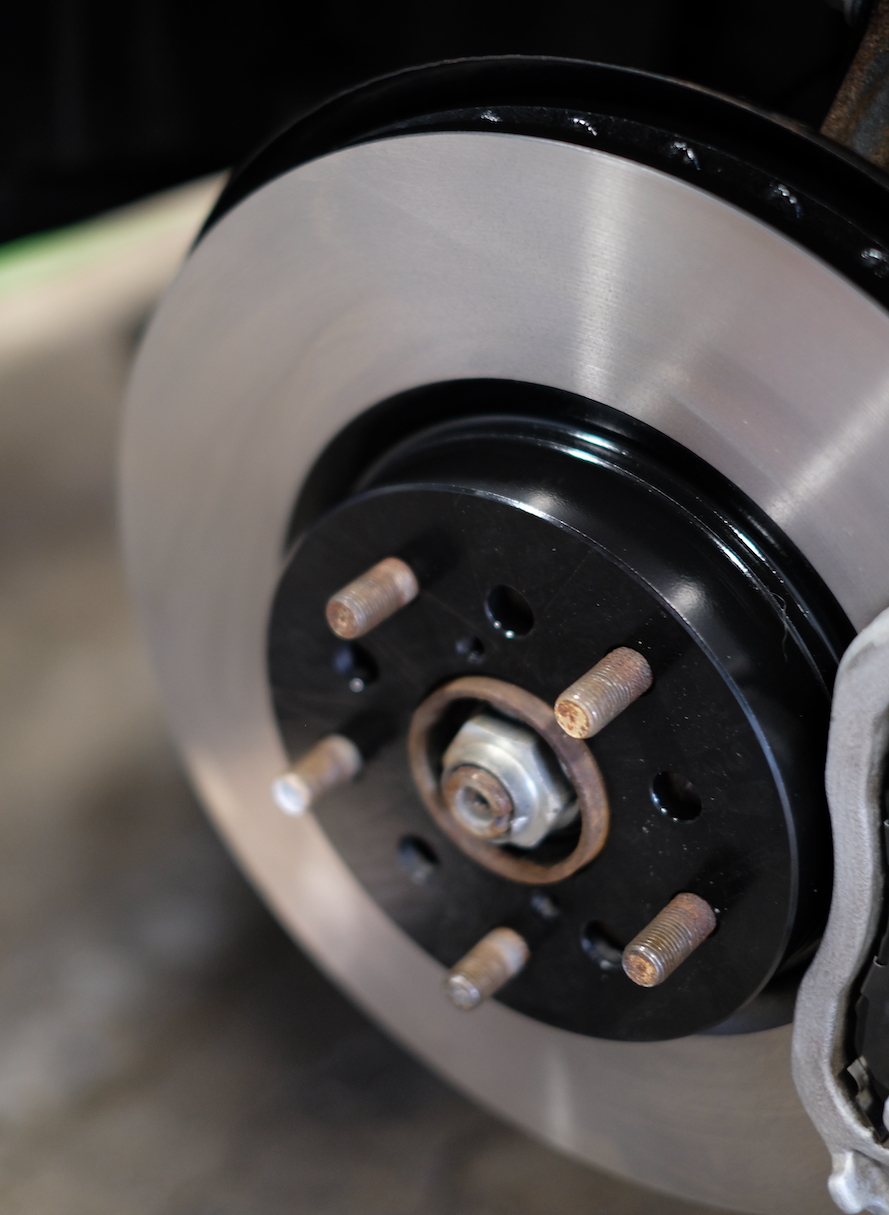 Overall I have MUCH more confidence in the cars ability to stop in an emergency. I don’t plan to track the car, but I could imagine this is a must-have upgrade for anyone who does! 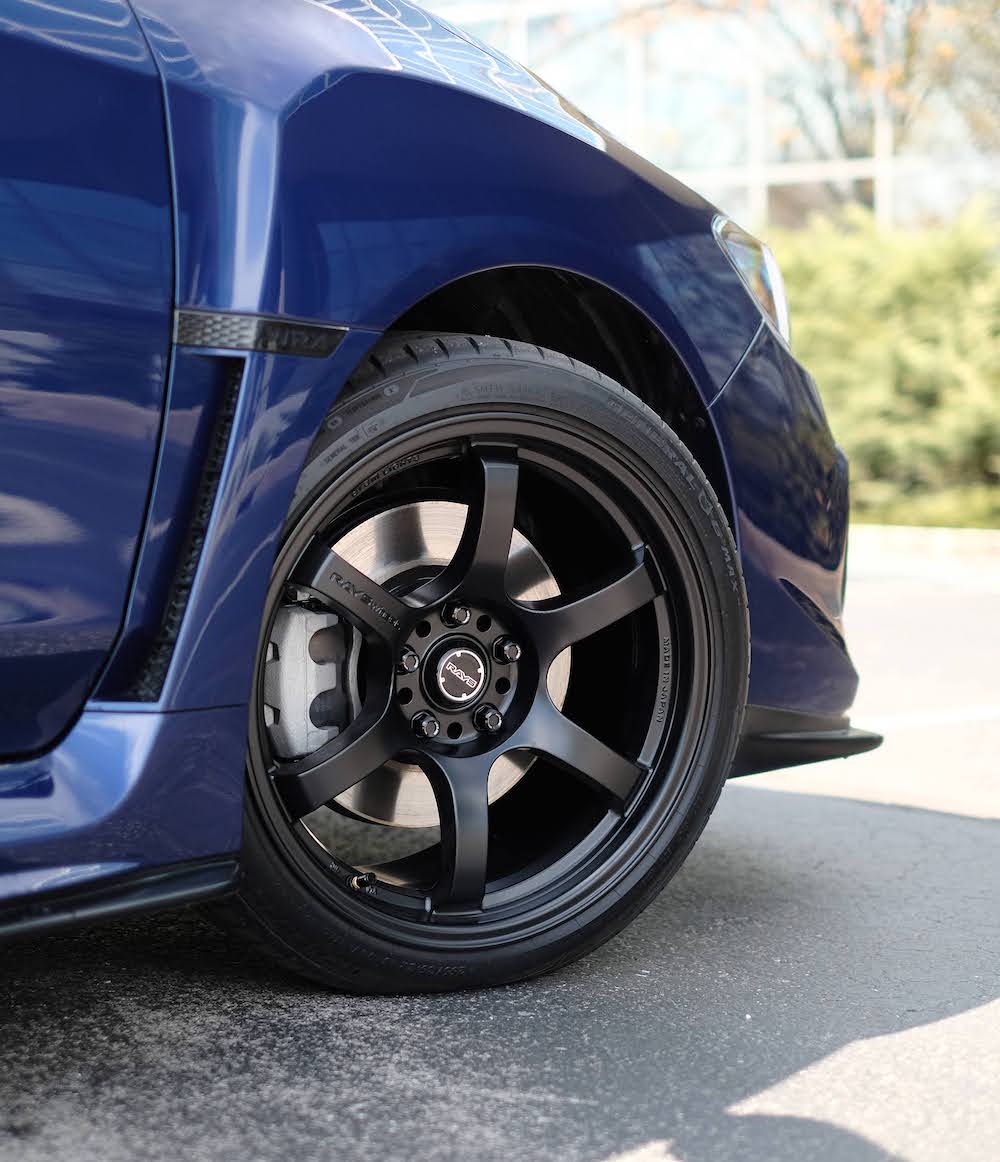 Huge thanks to Ken over at KNS Brakes for answering my questions and getting me pointed in the right direction. If you’re on the market for new performance brakes, be sure to check them out! And let him know I sent ya!